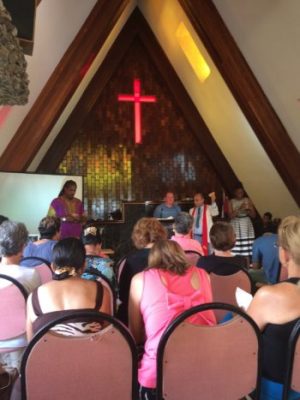 As a World Day of Prayer (WDP) USA Board of Directors, I was afforded the opportunity to travel to Cuba on March 29 – April 7, 2016.  This invitation from the Interreligious Foundation for Community Organization, Pastors for Peace encompassed travels to the providences of Havana, Matanzas and municipalities of Varadero, Luyano, Cardenas, Santa Marta and Triunvirato.

Our delegation of fourteen faith-based travelers from California, Missouri, New Jersey, New Mexico, and New York desired to heighten our knowledge of Cuba, its people and culture.  A three-day feminist theology conference, “Spiritual Journey of Wisdom and Love, “ held with representatives from the Caribbean, Latin America, Europe, Africa and the USA fostered an added interest in our visit to Cuba.

Celebrated in over 170 countries, meeting the women of Cuba who prepared this year’s materials for the WDP 2016, “Receive Children, Receive Me,” was of special interest.  Present and past board members, Rev. Shivonne McKay, Mrs. Patricia Penn and I exchanged highlights of our celebration events, both in Cuba and the US.

Several sites visited in Cuba, addressed the concerns of rural poverty and overexploitation and the needs and aspirations of the present without comprising the ability of future generations.  The Bellamar Caves and Gardens and the Demari Farm were two such sites.  We observed firsthand Cuba’s world famous health care systems, day care centers for children and senior citizens, homes for children without parental protection, and a center of Afro-Cuban culture and religious practices.

Most impressive was the residential school for youth and adults with Down’s syndrome and other neurologic conditions, “La Castellana.” Their motto, “Only love creates wonders,” was exemplified by the numerous creative arts in crafts, dance, singing, and pantomime, as well as their agricultural skills.  And the Museum of The Slave Route which chronicled the life of Carlota, a slave woman who led an uprising in 1843.  Although killed during the uprising, even after 173 years her heroic presence still has a great impact both inside and outside of the island. 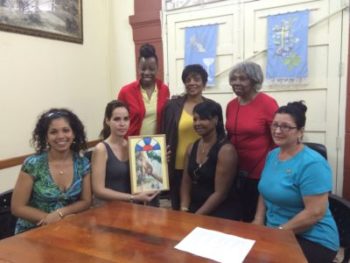 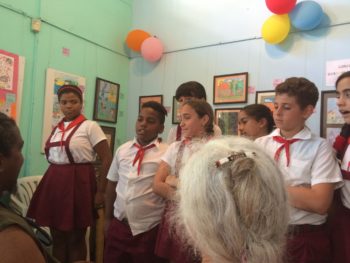 We dialogued with representatives of the Cuban Women’s Federation, a secular organization dealing with domestic issues.  And with Cuban women of Afro, Spanish and European ethnicity concerning issues in their society today. The effects of the new economic changes, race and class issues, their view of the ‘opening” with the US and President Obama’s recent visit.  On Sunday we worshipped, mostly in Spanish, at Varadero Presbyterian Church.  During our tour, we visited several others churches to familiarize ourselves with the syncretization of the African religions with the Spanish Roman Catholic practices called Santeria. And Catholic versus Protestant churches.

Many of us bathed in the blue waters of Cuba by moonlight.  Adapted well to our sparse, mid 1950’s but pristine accommodations.   Our meals were simple but plentiful. Breakfasts each day consisted of eggs, papaya, guava, pineapple, bread and coffee.  Lunches and dinners consisted mostly of rice and beans, fresh salads of lettuce, cabbage, tomatoes and cucumbers, vegetarian dishes, pork, chicken or fish entrées, and modest desserts with Cuban coffee in demitasse cups.

Cuba, a country surrounded by the Gulf of Mexico and the Atlantic Ocean is 90 miles off the coast of Florida.  A country with free education, health care, 98% literacy and 94% high school graduation.  A country where we felt safe enough to stroll around neighborhoods, shopping and eating. We met and interacted with Cubans as well as travelers from various countries.

Although freely touring the socialist country it was evident the country has many challenges.  The country’s economy is weak and lacks many of the material items so freely used in the U. S.  Many Cubans have difficulties purchasing what we consider basic needs.  They also must adjust to the dual currency system, one of which equates to US dollars.  The government provides each citizen with ration books amounting to $19 US dollars and if employed an average monthly salary of $25 US dollars.  A fresh pineapple we were told cost $15 US dollars.

Before leaving the Island on Eastern Airline (which has begun limited operations once again) we contributed monetary gifts, clothing, toiletries, over-the-counter first aid items, school, art and computer supplies to community agencies and churches.  A proud friendly people, Cubans desire more travelers to visit their country, meet their people, hear their stories and influence changes for a more prosperous society.